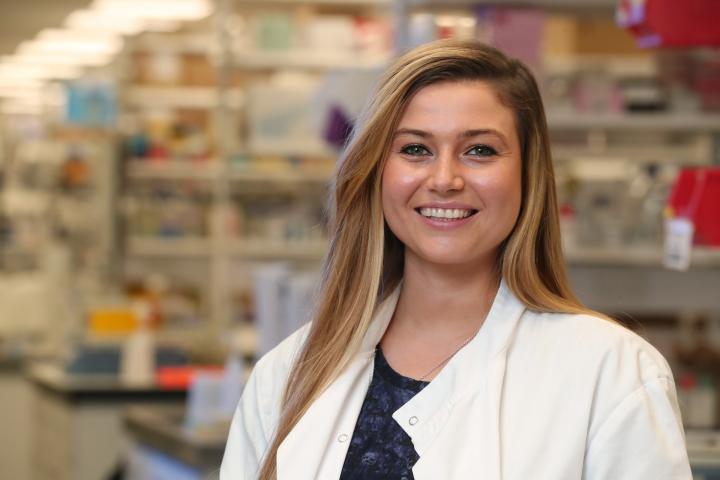 Posted at 16:20h in Uncategorised by admin

Congratulations to Dr Shannon Beattie, COO of GenoME Diagnostics Ltd, on being awarded a £50k mentoring and support package from Innovate UK‘s Women in Innovation Awards!

A leading female researcher at Queen’s University commercial spin-out, GenoME Diagnostics, has won £50,000 and a mentoring and support package after being named a winner at Innovate UK’s Women in Innovation Awards.

Dr Shannon Beattie is Chief Operating Officer of GenoME Diagnostics — a spin out company from the Patrick G Johnston Centre in Queen’s University Belfast, established in 2020. It is built on over a decade of academic research, primarily by its three key founders Dr Mullan, Dr Beirne and Dr Feeney.

The business is using cutting-edge technology to develop a user-friendly, accurate and cost-effective diagnostic test for ovarian cancer, a disease often only ever detected in later stages.

GenoME Diagnostics’ lead product, OvaME, is the novel blood test for earlier and more accurate detection of ovarian cancer, specifically High Grade Serous Carcinoma (HGSC). It is currently undergoing the necessary validation for regulatory approval with the goal to enter the public health system as a disease monitoring tool.

HGSC is the most common and aggressive form of ovarian cancer, accounting for over 70% of cases, with early detection key for improved patient survival. However, the current ovarian cancer blood test CA125 is fraught with many well documented inaccuracies, being detectable in only half of all early stage ovarian cancers, and often elevated in other non-cancerous conditions. GenoME Diagnostics aims to combat these problems with its novel blood test.

To continue the firm’s innovative research and subsequent diagnostic tool, Dr Shannon Beattie has been awarded a Women in Innovation Award.

Innovate UK’s Women in Innovation awards celebrate female entrepreneurs from across the UK with exciting, innovative ideas and ambitious plans that will inspire others.

In 2022, 39 women across the UK have been recognised, receiving a support package of £50,000 as well as tailored mentoring and access to a network of like-minded women.

Speaking about the win, Dr Shannon Beattie said: “In summary, our main aim with this project is to improve the chance of survival for all ovarian cancer patients, while reducing the number of women who get a false positive reading and reduce stress for those patients and strain on stretched healthcare services. The support package associated with the award is a great opportunity to develop what we are doing and hone my own skills in business and taking academic innovations to market. It will also be invaluable to not only me but the company as it scales and launches the product to market.”

The businesswoman said exposure from the award win will help raise the profile of the business as it looks to raise a subsequent round of funding to expand its diagnostic portfolio and she hopes to use the accolade to inspire others in her position.

She added: “I am so pleased to hopefully be able to use this platform to inspire other young people to take the leap with their innovative ideas and chase their dreams with it. Like many others I definitely suffer from imposter syndrome almost every day, but this award has been great for my confidence and provided me with a level of validation which I simply have never had before.It is great to see a lot of reports coming out this year about the increase in women founded start-ups, particularly young women with over 14,000 businesses held by 16–25-year-olds in the UK last year. And hopefully that is a trend that can continue to grow, and we can see some of these start-ups coming through programmes like this in the next few years.”

GenoME Diagnostics has attracted many awards over its lifetime including a 50,000EURO for being crowned All-Ireland Best New Start Company by the IntertradeIreland Seedcorn Investor Readiness Competition. They were also nominated this month as ‘Deal of the Year’ in the sub £2.5M category by Northern Ireland Dealmakers Awards.

In addition, the business recently secured a successful seed funding round supported by QUBIS, the commercialisation arm of Queen’s University, Deepbridge Capital and Co-Fund NI (managed by Clarendon Fund Managers) which is part of Invest Northern Ireland’s Access to Finance portfolio.