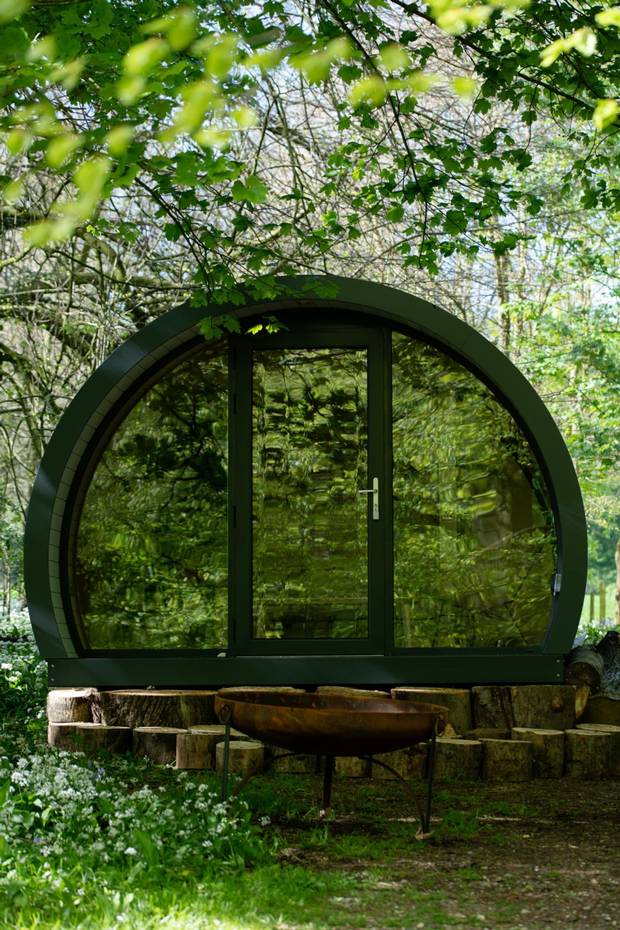 Posted at 11:25h in Uncategorised by admin

Historic Glenarm Castle, ancestral home of the McDonnells, is to be the first location for five high-spec ‘glamping pods’ – designed and built in Northern Ireland.

The pods are set in a picturesque location in the ancient demesne, on a hillside which gives them a panoramic view over Glenarm Castle, the Co Antrim village itself and on to the North Channel and Scotland beyond.

The futuristic pods, with their space-age aluminium exterior, are the brainchild of engineer Peter Farquharson of Intupod, a Carryduff-based design firm. They are managed for clients by further.space, a sister company.

The pods combine luxury with simplicity, he said, and could soon be spotted in dozens of scenic locations across Scotland and Ireland.

“I love the structural form of the pods – the arch shape is a very efficient structure,” he said.

The firm already has 32 landowners across Ireland and Scotland keen to work with them on the pod concept, which builds on the ‘glamping’ phenomenon that’s become so popular in England, Mr Farquharson said.

“Glenarm is the first to go live. There’s been a lot of interest, and we’re very excited about that,” he said.

Adrian said the idea for the pods had come from the castle’s wedding business.

“We started doing weddings two or three years ago, and one of the drawbacks was that there is not much accommodation in Glenarm for wedding guests,” he said.

“We wanted to provide accommodation for our guests, and we wanted something a bit different. We do quirky weddings here at Glenarm Castle, and the pods fitted in well with that theme.

“It’s a perfect solution. The pods will be great for the weddings, and will do all year round for tourists, too.

“It’s a marriage we’re sure will last!”

The estate manager said booking for the new pods were going well.

“We’re launching them for the Dalriada Festival, on July 13-14, and they’re fully booked already,” he said.

“And the bookings are coming in rightly for later dates.”