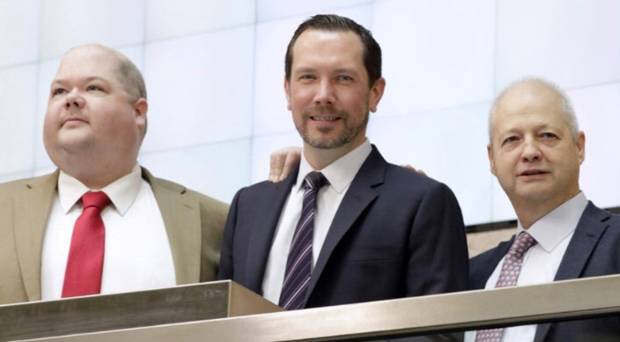 Posted at 09:43h in Uncategorised by admin

The Northern Ireland pharma firm and Clarendon portfolio company has become the first business to float on the junior stock market this year.

Shares in Belfast-founded Diaceutics rose by 22% at the opening of the Alternative Investment Market (AIM) yesterday as it became the fourth company from here to be listed on the stock market.

The firm, which has offices in Belfast, Dundalk and Singapore, employing a total of 65 people, said its share rise implied a market capitalisation of £64.5m.

Diaceutics, which analyses data from patient records and insurance details for use in precision medicine, had raised more than £20m in advance of its initial public offering.

Around 21 institutional investors have signed up to back the company.

It provides services to 20 of the 30 largest pharmaceutical companies in the world.

Founder Peter Keeling, who lives in Belfast, said the advance fundraising had been more successful than anticipated.

“We thought we would only raise £11m, but investors spoke to us about wanting to make sure we had the best wind behind us, so they encouraged us to draw down extra funds,” he added.

Diaceutics works with pharmaceutical companies to analyse de-identified data drawn from health insurance claims in the US and from clinical labs.

It has worked to treat many forms of cancer as well as tuberculosis and hepatitis.

The firm’s findings can be used to find gaps in treatments so that future treatments can be targeted more efficiently.

Mr Keeling said the precision medicine sector in which the firm operates was a strong one.

“It seems strange to do this within the midst of Brexit, but the success speaks to the strength of Diaceutics, and we are the first AIM initial public offering (IPO) of the year so far.

“Other people were wary of bringing forward an IPO, but people told us, ‘Your story is good. Go through the various regulatory and compliance processes and we’ll support you’.

Mr Keeling said the company was quickly outgrowing its Belfast home at offices in Adelaide Street. And he added he expected future growth would fuel expansion at all its sites.

The firm may also list on the Irish Stock Exchange in future and have dual-listing status.

Diaceutics has joined two other Northern Ireland firms on the AIM – First Derivatives and another Clarendon portfolio company, Fusion Antibodies. Belfast-based IT firm Kainos is listed on the main stock exchange.